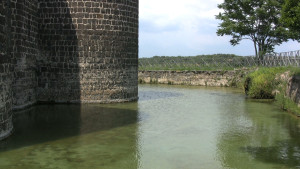 Warren Buffett: “A truly great business must have an enduring ‘moat’ that protects excellent returns on invested capital.”

Mr Buffett said this in his letter to Berkshire shareholders (February 2008) for Year 2007.

Illustrating on this ‘moat’ concept, Mr Buffett said: “The dynamics of capitalism guarantee that competitors will repeatedly assault any business ‘castle’ that is earning high returns. Therefore a formidable barrier such as a company’s being the low-cost producer (GEICO, Costco) or possessing a powerful world-wide brand (Coca-Cola, Gillette, American Express) is essential for sustained success. Business history is filled with ‘Roman Candles,’ companies whose moats proved illusory and were soon crossed.”

So what industries does Mr Buffet rule out then?

“Our criterion of ‘enduring’ causes us to rule out companies in industries prone to rapid and continuous change. Though capitalism’s ‘creative destruction’ is highly beneficial for society, it precludes investment certainty. A moat that must be continuously rebuilt will eventually be no moat at all.

“Additionally, this criterion eliminates the business whose success depends on having a great manager. Of course, a terrific CEO is a huge asset for any enterprise, and at Berkshire we have an abundance of these managers. Their abilities have created billions of dollars of value that would never have materialized if typical CEOs had been running their businesses.

“But if a business requires a superstar to produce great results, the business itself cannot be deemed great. A medical partnership led by your area’s premier brain surgeon may enjoy outsized and growing earnings, but that tells little about its future. The partnership’s moat will go when the surgeon goes. You can count, though, on the moat of the Mayo Clinic to endure, even though you can’t name its CEO.”