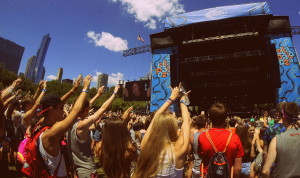 In a June 2014  article , “Apple Stock Still Suffering From The ‘Lollapalooza Effect'”,  the unusual circumstances surrounding Apple were described as follows: the death of Steve Jobs, the rapid decline of BlackBerry, and the rapid advance of Android OS and handset maker Samsung in particular. These unusual circumstances have been woven together into a popular narrative …This narrative sparked a mob mentality and drove Apple’s share price from its high of $700 down to just below $400 (a decline of over 40%).”

So the “lollapalooza effect” was the weaving together of the unusual circumstances to cause a stampede on the stock price of Apple.

The term “lollapalooza  effect” was propounded by Charles Munger,  the partner of legendary investor Warren Buffett at Berkshire Hathaway.

The word “lollapalooza” itself means  “a person or thing that is particularly impressive or attractive”; its origin is said to be in the late 19th Century.

But as an event,  lollapalooza   is an annual music festival featuring popular alternative rock, heavy metal, punk rock and hip hop bands, dance and comedy performances and craft booths. It has also provided a platform for non-profit and political groups and various visual artists. (Wikipedia)

This concept of lollapalooza effect,  which the intelligent investor needs to understand, was touched upon by Charlie Munger in a 1995 speech entitled Psychology of Human Misjudgement.  The latter was about his intriguing thoughts on the 25 tendencies that lead people  to make really bad decisions.  The ideas can be found in the  book “Poor Charlie’s  Almanack”, a collection of speeches and talks by Charlie Munger.

Stock selection for the defensive investor